The Corvette Name and Myron Scott 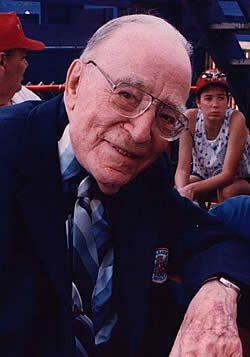 DETROIT — Myron E. Scott, a newspaper photographer who created the Chevrolet-sponsored All-American Soap Box Derby and later named its equally All-American sports car -- the Corvette -- died at his home on Sunday, September 4 in Kettering (outside Dayton) Ohio. He was 91.

Services will be at 11 a.m. on Wednesday, October 7 at the Tobias Funeral Home in Kettering. Entombment will be in David's Mausoleum in Kettering. (Phone of funeral home is 937-252-3122.) Surviving is his wife of 68 years, Clara Jane. (They had no children.)

"Myron Scott made a tremendous contribution to the image of Chevrolet for three decades," said John G. Middlebrook, Chevrolet general manager and a General Motors vice president. "Myron's talent and creativity will long live in the Corvettes he named, and the excitement of tens of thousands of young competitors in the Soap Box Derby, which he originated."

Born in Camden, Ohio, Scott graduated from high school in Dayton and attended the Dayton Institute of Art. He was first an artist and then a staff photographer for the Dayton Daily News. To fill a Sunday feature page in 1933, he noticed two boys with rough, soap box-type cars a few blocks apart. He told them to get friends and he'd do a photo layout of a race. From this he got the idea for the Soap Box Derby.

There was great interest and later that year the newspaper ran a race that attracted 40,000 people to watch 300 young boys coast down Burkart Hill.

In 1934, the paper again sponsored the race in Dayton. In 1935 Chevrolet assumed sponsorship, and the race moved to Akron with 32 cities entering. Scott joined Chevrolet in Detroit as assistant advertising manager to run the All-American Soap Box Derby, which became one of the nation's greatest amateur racing events. Chevrolet sponsored the Derby until 1972.

In 1953, Chevrolet introduced an all-new fiberglass sports car, and there was much indecision about a name. Many hundreds were rejected. Scott submitted "Corvette" because he said "it began with a `C'...rolled well off the tongue...and reflected the excitement of a fast World War II war ship named Corvette."

While he was honored by Corvette owners for many decades, Scott downplayed his role in the car's success. "The name didn't sell the car," he said. "It was the designer's efforts. I was just another team player trying to do a job."

In 1955 Scott moved to the newly-formed Chevrolet Public Relations department as assistant director, responsible for photography of new cars, plus design of press kits, graphics and special events. He retired from Chevrolet in 1971.