This article is an in-depth look at the conceptual differences between horsepower and torque as they pertain to the Corvette.  Jim Ingle is no stranger to the Corvette community.  In the 1990s, Jim worked primarily as a Corvette Development Engineer at the General Motors Proving Ground.  Among numerous other duties for Corvette and other GM platforms, he is probably most well known for his planning/mapping of the Corvette ZR-1 introduction to the automotive press in Carcassone, France as well as several of the long test drives of the early C5 prototypes as described in James Schefter's book, "All Corvettes Are Red".  He has also made numerous appearances at the Black Hills Corvette Classic in South Dakota over the years.

The article is in a question and answer format and Jim Ingle was kind enough to share with us the concepts of horsepower and torque and how they apply to the Corvette.  The information he provides here is both interesting and very informative and we would like to thank him for taking the time to share his work with us.  He writes:

Q.  "What is the difference between horsepower and torque and how are both of them measured in order to determine a Corvette engine's output?"

A.  "You have asked a simple question that's a little difficult to provide a simple answer for.  I guess we should start at the beginning.  Two views of the same measurement are involved:  power and horsepower.  Power is defined as "the rate of doing work" or the "rate of energy transfer".  Interestingly, power cannot be measured directly....you can only measure its effects.

I don't recall the details of the story, but the idea of horsepower came from 18th century British coal mines where horses were used to pull ropes strung over pulleys that connected to loads being lifted out of the mines.  Multiplying the load by the speed of the horse walking provided a measure of one horsepower.  Obviously, like all early measurements, (e.g. a "yard being the distance from your nose to an outstretched finger) the value you get depends a lot on the horse's size, physical condition, weather, etc., etc.  In any event, the number that evolved is that one horse's power is the equivalent of lifting 550 pounds one foot in one second or 33,000 lb-ft/min.

Now for torque.  I hope you are familiar with torque wrenches.  In any event, if you tighten a nut with a wrench one foot long and you push with a force of 50 pounds, the torque you apply is 50 lb-ft.  If you take that concept and apply it to a "prime mover" that produces rotary motion of a shaft and apply a brake to resist the rotation, that resistance is measured in terms of torque.

With engine tests, that's what we do.  The engine is secured to a test stand and a device that can apply a restraining torque is attached to the output shaft.  The device is called a "dynamometer".  It has to be capable of dissipating the energy absorbed, so a simple friction brake would quickly overheat and fail.  Modern dynamometers are typically generators that put their power into the power company's electrical system.

To test the engine's output, you apply full throttle and adjust the retarding force of the dynamometer to hold the engine to a desired speed.  The dynamometer is mounted so that it is free to pivot and a measuring device restrains it from rotating.  Early dynamometers used scales similar to bathroom scales.  Contemporary dynamometers use load cells to provide an electrical signal that can be used for computations.

The engine is then run at a series of speed points, perhaps every 400 RPM from 800 RPM to 6200 RPM and the speed and torque values are recorded at each point.  With these data, a curve of torque versus speed can be plotted:  the engine's "Torque Curve".  The highest value on the curve is the value commonly referred to as the engine's "torque rating", such as 385 lb-ft on the [1993-1995 ZR-1s] LT5 [engine].

Now for the fun part.  I mentioned above that you can't measure power....only its effects.  To obtain the engine's "Power Curve", the torque at each test point is multiplied by the speed and by a conversion constant.  Of course, the conversion constant is derived from our old friend, 33,000 lb-ft/min that came from the British coal mine horses.  In the numbers we're used to, multipy torque in pounds-feet by speed in RPM and divide by 5,252 (the constant, which is 33,000 divided by 2π, to convert to a rotational value).

The first plot marked "Figure 1" has typical torque and power curves for a high performance production engine.  The peak torque occurs slightly below 5,000 RPM.  The peak power is slightly greater in value and occurs at 6,000 RPM. 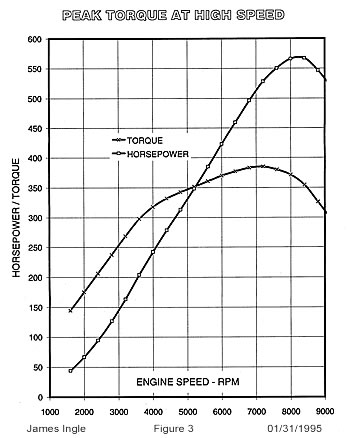 From these examples, you can easily see why racing engines tend to have very high speed power peaks to maximize the power produced by a given size (displacement) of engine.  As the speed for peak torque rises, such as with a more radical camshaft profile, the peak power rises in relation to the peak torque.  With engines having very high peak torque speeds, as with motorcycle and Formula 1 engines, the peak horsepower is two or more times the peak torque.  Conversely, you can also see why large low RPM diesel engines in trucks, locomotives and ships have relatively low power ratings, even though they produce large amounts of torque.  All of this is strictly based on the math."